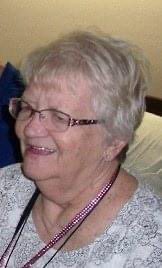 Ruby Ileen Wyatt, 88, of Albany, GA, died Tuesday, October 27, 2020 at Phoebe Putney Memorial Hospital. The family will receive friends Friday, October 30, 2020 from 5:00 p.m. until 6:00 pm at Mathews Funeral Home. A visitation will also be held on Monday, November 2, 2020 at the Dove-Sharp-Rudicel Funeral Home in North Vernon, IN with a graveside funeral service to follow on Tuesday November 3, 2020 at Lincoln Memory Gardens Cemetery in Whitestown, IN. Rev. Sherman Beville will officiate. Mrs. Wyatt was born in Scipio, IN on June 13, 1932 to John and Flossie Madden. She grew up in Indianapolis, IN and married the late Robert Clyde Hale at the age of 16. Together, they raised their family in the Indianapolis, IN area and Robert died in 1983. She was a talented seamstress and could sew anything from a wedding dress for her daughter to a square-dancing outfit for herself. Mrs. Wyatt later married George A. Wyatt and they enjoyed selling their jewelry at Flea Markets and other Venues. After George’s death, she moved to Albany, GA in 2013 to be closer to family where she was a member of Albany Grace Church of Nazarene. Survivors include her daughters, Diana (Gerald) Millard of Albany, GA and Vicky (Steven) Jaynes of Brunswick, GA, five grandchildren, Sandra (Christopher) Gibbs of Indianapolis, IN, Jennifer Jaynes of Brunswick, GA, Heather (John) Lombardi of Leesburg, GA, Holly Johnston of Cartersville, GA and Eric Millard of Lakeland, FL and six great-grandchildren. Those desiring may make memorials in memory of Mrs. Wyatt to the American Cancer Society.
To order memorial trees or send flowers to the family in memory of Ruby Wyatt, please visit our flower store.
Send a Sympathy Card