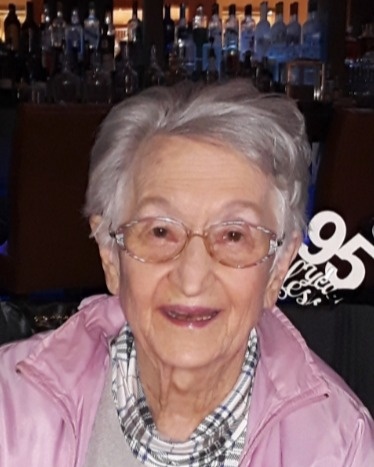 Renee Mary (Salaski) Swette. 96, of Albany, Georgia passed away October 2nd, 2022 surrounded by her family and loved ones. A funeral Mass will be held Thursday October 6th at 10:30 AM at St. Theresa’s Catholic Church in Albany, followed by her Internment at 2PM at Andersonville National Cemetery.
Mrs. Swette was born in Owatonna Minnesota April 19, 1926. A thumbnail sketch of her extensive professional nursing career is difficult to condense. Upon graduating from nursing school she was employed by St. Francis Hospital while completing her Baccalaureate degree.  She felt a call for new challenges and accepted a position with the U.S. government at a civilian hospital in the Panama Canal Zone where she served in the children’s ward. It was there she met and married James, her husband, of 69 years. Renee took time out from her professional career to raise 6 children and shepherd her husband through college into a career in education. When she returned to work in 1968, Renee began a new phase of nursing in Geriatrics. Upon her husband’s retirement they moved to South Georgia where she was instrumental in facilitating the beginning of Sowega (South West Georgia’s) Counsel on Aging, a system of community based services to the elderly providing care in 14 counties across the region. In her spare time she worked with her church to establish a parish nursing program because “elderly people need help” We would be remiss not to mention that she played a pretty good game of golf as well!
Renee’s life was one of service both to her family and community. She was especially proud of and dedicated to the nieces and nephew of the Parslow family.  “Aunt Renee” embraced each one of them as if they were her own.
It would not be an exaggeration to say she touched the lives of thousands of people. It is certain that a little portion of the world has been a better place because of her leadership and service.
Preceded in death by son, Paul Swette she is surrvied by, son, Timothy (Susan) Swette, daughters, Laura (Joseph) Emery, Mary (Larry) VandenPlas, Karen (David) Husain, and Joni (Michael) Chergosky. She was cherished by her grandchildren Christian Lofgren, Christopher Laister, Renee Glausier, Charlie Sides, Terrance Hatch, Patrick Arboe, Erin McKenzie, Nick VandenPlas, R.J. Swette, Leila and Joseph Husain, Miranda, Tanner, and Kendahl Chergosky.  She was immensely proud of her fourteen great-grandchildren, one great- great grandchild.
While we will miss her greatly we know she is now reunited with her husband and son and will be “calling the hogs” each and every SEC Saturday!
Donations to honor Renee’s memory may be made to Pruitt Health Hospice and Palliative Care or St. Clare’s Center/ Neighbors In Need program

To order memorial trees or send flowers to the family in memory of Renee Mary Swette, please visit our flower store.