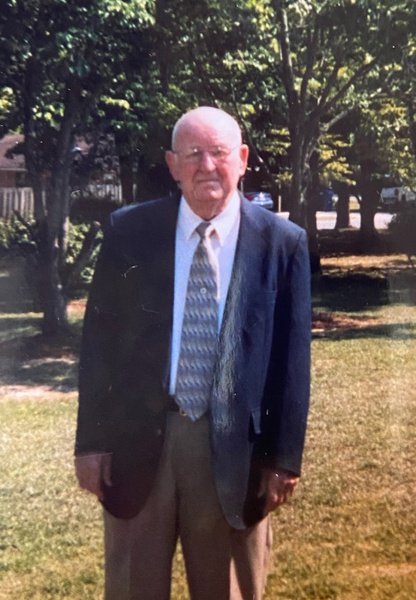 Rassie Lee Phillips, 94, of Colquitt, Georgia passed away at his home on Friday, April 9, 2021 with family by his side. A Graveside Memorial service will be conducted on Thursday, April 15, 2021 at 11:00 am at Colquitt City Cemetery.  Rev. James Scarborough will officiate.  Due to ongoing concerns caused by Covid-19 mask and social distancing are to be practiced. Rassie was born on November 17, 1926 in Dale County Alabama to the late Daniel Everett Phillips and Izzie Mae Cox Phillips.  He graduated from Miller County High School and was a member of the First Baptist Church of Colquitt. On January 20, 1945 he was drafted into the United States Army.  He served in the Pacific and was honorably discharged in late 1946. He and Calista Holt were united in marriage on March 2, 1950.  He retired after 42 years in civil service work, the last 25 years he served as the Postmaster in Colquitt, farmed with his two sons (Toby and Terry) and occasionally put his wife to work helping catch cows.  After retirement Rassie and Calista enjoyed traveling over the United States and Canada. He is survived by his wife Calista of 71 years; two sons Toby (Lynn) Phillips of Colquitt and Terry (Jennifer) Phillips of Colquitt.  Grandchildren Allison Kelley of Camilla, April (Dennis) Young of Colquitt, Leigh (David) Green of Valdosta, Ansley (Tommy) Johnson of Kingsland, GA, and Brittany (John) Barker of Bainbridge, eleven great-grandchildren; Briggs and Bree Kelley, Harmony Harper, Davis Green, Laken Timmons, Aubree, Freya and Natalee Johnson, and Aden, Hunter, and Ethan Black, as well as many nieces, nephews, and cousins. Rassie was preceded in death by his parents Daniel and Izzie Phillips, two sisters Nancy Cross and Ruby Roberts and two brothers Leslie and Harold Phillips. The family would like to give a special thanks to his sisters – in – laws Inez Womble and Eloise Holt, Caregivers Donald Ray Dykes, Toni Hardage, Mallory Brakin, nieces Wavie Holt and Cathy Kilmer, Kelly Waller, Integrity Hospice and Loving Hands.  Also loving neighbors Terry and Betty Joe Toole and Milas and Carolyn Grant. In lieu of flowers memorials may be made to Integrity Hospice 303 E. Shotwell Street, Bainbridge, GA 39819 or to First Baptist Church of Colquitt 351 E. Pine St, Colquitt, GA 39837
To order memorial trees or send flowers to the family in memory of Rassie Phillips, please visit our flower store.
Send a Sympathy Card