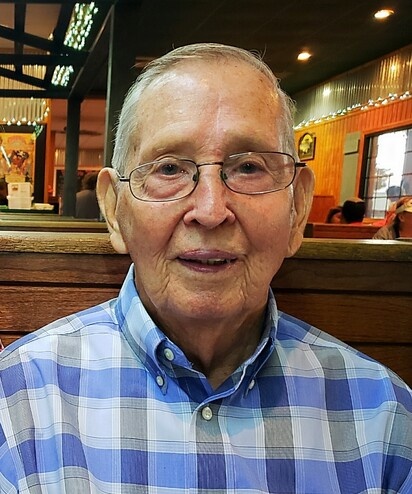 Mr. Dollar was born on January 28, 1926 in Miami, FL to Benjamin and Mary Dollar.  He was raised in Thomasville, GA and graduated from Thomasville High School.  After Pearl Harbor, he lied about his age and at 17 he joined the United States Navy.  Mr. Dollar served in World War II, the Korean Conflict and Vietnam and retired after twenty years.

Mr. Dollar graduated from The University of Georgia and moved his young family to Albany, GA in 1964.  He was employed with the Albany Area Vocational Technical School for twenty-four years and was a workaholic.  He was a faithful member of Christ United Methodist Church and enjoyed working in the yard and was an accomplished wood worker and furniture maker. Mr. Dollar was preceded in death by his first wife, Shirley Gosselin Dollar and a son Mike Dollar.

The family will receive friends from 6:00 pm until 8:00 pm Friday at Mathews Funeral Home.

In lieu of flowers, those desiring may make memorials in memory of Mr. Dollar to Christ Church of Albany, 505 Byron Plantation Road, Albany, GA 31721.

To order memorial trees or send flowers to the family in memory of Joseph L. "Joe" Dollar, please visit our flower store.
Send a Sympathy Card