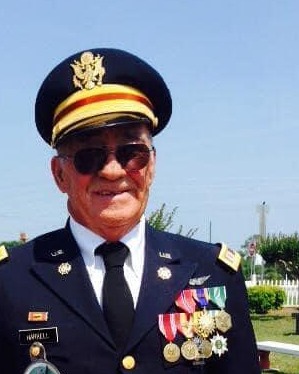 Denzil H. Harrell, 76, of Smithville, GA, died January 11, 2023 at Phoebe Putney Memorial Hospital.  Funeral services will be held Saturday, January 14, 2023 11:00AM at Friendship Baptist Church in Leesburg, GA with Military Honors provided by The American Legion.  Rev. Mark Spraggins will officiate.  Committal services will follow on January 20, 2023 at Andersonville National Cemetery at 10:00 am.

Denzil was born in El Paso, TX on September 3, 1946 to Holton and Reba Harrell.  While still an infant, his family moved back home to Acree, GA.  Denzil was in the first graduating class of 1965 at Dougherty High School.  After High School, he served in The United States Army, attended Officers Candidate School and served as a Chinook Helicopter Pilot in Vietnam where he achieved the rank of Captain. He was later promoted to Major once his military commission expired.

In addition to his parents, he was preceded in death by a sister, Linda Presson.

The family will receive friends Friday, January 13, 2023 at Mathews Funeral Home from 6:00 pm until 8:00 pm. The family is also gathering at his residence in Smithville GA.

Those desiring may make memorials in memory of Denzil to Friendship Baptist Church or to The American Legions’ Post # 182 and #30 Honor Guard.

To order memorial trees or send flowers to the family in memory of Denzil Holton Harrell, please visit our flower store.