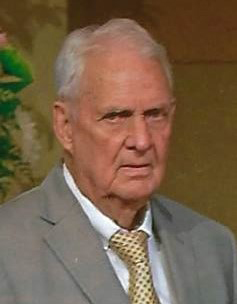 Clayton Daniel Morey, 90, of Albany, Ga passed away peacefully at home on Monday, June 29, 2020. There will be a private family graveside service on July 3, 2020 at Spring Hill Free Will Baptist Church Cemetery. A memorial celebration of Dan’s life will be announced at a later date.

Born at home in Mitchell County to Thomas N. Morey and Ruby Mae Smith, Dan spent most of his life in the fields and woods of the area. He served in the U.S. Army, Airborne Division. An electrician by trade, he worked all over the United States. In addition, he was also a local farmer. He served as a Master Mason for over fifty years. Dan had strong ties to his community and was known by many as a person to call when help was needed but also a friendly face for a cup of coffee and conversation at the corner store. Always one to enjoy a good joke or prank, he caringly picked on those he loved. He had a soft spot for children and animals his whole life.

He met and married the love of his life Barbara “Bobbie” Shankles in March of 1955. They had two children, Thomas Kevin and Dana Kay.

His parents, along with his siblings- Eunice M. Bowles, Juanita “Pete” K. Hall, W. Herbert Morey, and Phoebe A. Brown, predecease him.

To order memorial trees or send flowers to the family in memory of Clayton Daniel Morey, please visit our flower store.
Send a Sympathy Card